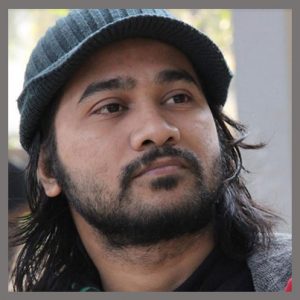 Sumon Delwar is a graduate of Literature and writes poetry and edits a film magazine besides making films. Sumon gained experience as an assistant to filmmaker Tanvir Mokammel and studied filmmaking at Bangladesh Film Institute (BFI). He produced two shorts shown in many festivals and a documentary on the Bangladesh-Pakistan Naval war in 1971 called ‘Jologuerilla’ is almost finished. Sumon is currently working on a feature length documentary called ‘My Sister, My friend’. An HIV/AIDS infected widow of a migrant worker, her fight with land grabing in-laws and her dream to become a paramedic to help the three daughters is the subject of this partially finished documentary. This project was recently invited to the DocEdge Kolkata, the asian forum for documentary co-production market http://www.docresi.org/selected-project-DocedgeKolkata-2018.aspx .  The same project was at the Dhaka DocLab, the documentary co-production project market for south asian filmakers in September 2017 and won an award. http://dhakadoclab.org/